We have considered the interruptions to our energy supplies that can arise from the 21st century problem of intermittency of wind-produced electricity, and from the more traditional local threats of strikes, protests and other nations’ willingness to interfere with cross-border trade on protectionist grounds. But we remarked that, however disruptive these have been and can be in future, they are mere nuisances compared to the prospect of strategic geo-political actions taken with the deliberate aim of depriving us of the energy upon which our civilisation has come to depend.

At the most apocalyptic and obvious end of the spectrum is war.

By the time of WW1, oil had become essential to industry and naval warfare and, unlike the equally vital coal, was frequently obtained via lengthy supply chains with shipping often a vital link. Thus, blockading Britain’s supplies of imported oil, as much as food and metal ores, was a major strategic goal of German war policy and, as later in WW2, they came close to succeeding with their Atlantic naval actions against British shipping.  As late as the end of 1943 - even with the USA having been in the war two years - the UK almost ran out of oil.  Both nations put in huge efforts to build up oil supply networks, including innovative operational techniques such as the PLUTO system under the Channel to sustain invasion operations in Normandy. 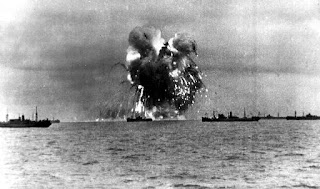 For Germany itself in WW2, accessing oil resources became a primary early goal, and its thrusts into the oilfields of Romania, and then towards the Caucasus, were undertaken for this purpose.  When the attempts to take Baku failed, it was forced to go to extreme lengths to develop synthetic fuels and lubricants.  Both Speer and Eisenhower asserted that Germany lost the war primarily because by 1944 it was unable effectively to fuel its armour and airforce. On the opposing side Russia undertook extraordinary efforts to maintain constant supplies of oil to its fronts at Leningrad and Stalingrad, under the heroic engineer Nikolai Konstantinovich Baibakov, the Soviet Union's last living Commissar.

Control over energy supplies – or their destruction - was a central aspect in many other theatres of 20th century warfare, and would be again in future. Oil has been and remains at least one critical factor in Western military engagements in the Middle East; and China is acutely aware of its own dependence on imported energy. Self-sufficiency in oil is a long-standing American obsession.

There is a sense in which the vulnerability of energy supplies was not very interesting during the Cold War, when both sides were able to project vast destructive power at a distance. So what if the USA was well supplied with local oil ? These supplies were still vulnerable to Russian attack, and vice-versa, with large and totally static targets such as nuclear power plants and gas pipelines still more at risk. In such a scenario, ‘self-sufficiency’ is more of a logistical detail than a strategic guarantor of continuous energy supply.

But with the advent of ‘asymmetric warfare’ which is likely to characterise future conflicts, the whole question becomes altogether more interesting. If your major foes are unlikely to mount a direct physical assault on your domestic supply lines - either because they do not have the capability [Iran], or do not choose to conduct hostile operations in that manner [China], then keeping energy supplies local may very well offer significant advantages compared to the vulnerability of more extended, external lines of logistics which can be subject to a plethora of debilitating indirect actions and pin-prick attacks.  An act of unattributable piracy here, a small distant pipeline rupture there ... much more secure if your supplies originate close to home, and travel short distances across friendly territory.  We shall return to self-sufficiency in the next post in this series.

If war seems an extreme contingency for energy planning today (and you'll struggle to find much evidence of it being taken into account in current UK government energy thinking), then we surely cannot fail to give serious consideration to the great external political threats that have actually impacted on Western energy supplies in the past few decades.  At the less critical end of the spectrum has been the collateral disruption inflicted on European customers for Russian gas whenever their disputes with the Ukraine spilled over into actual interruption of supplies.  These short-lived but uncomfortable episodes have always happened in winter, and have seen serious short-term disruption for Eastern Europe and countries such as Italy, whose winter gas comes significantly or perhaps entirely from Russia, and whose strategic gas inventories are rapidly depleted.

While few imagine this is anything more sinister than a rather casual Russian attitude to the consequences for innocent bystanders, it has caused many nations to maintain higher gas inventories than would otherwise be necessary for operational reasons alone, and has been one of the reasons why countries like Poland are working hard to diversify their sources of gas (there are other reasons at work, too.  At the same time it is fair to point out that Russia has made, and continues actively to make large investments on pipelines that outflank the Ukrainian problem, first to the North and then to the South: they have no desire to be known as a politically unreliable supplier.)

By far the biggest political assault on the West's energy supplies was of course the OAPEC oil embargo, the 40th anniversary of which will be upon us soon.  Explicitly a hostile geo-political move, it was directed against selected Western countries - notably the USA and the Netherlands - in retaliation for the support given to Israel in the Yom Kippur war.  This disruption over several months (long after actual fighting had ceased) was colossal: and the economic effects damaging and long-lasting.  Of course, it also resulted in various large-scale initiatives at the global strategic level to prevent or counter such actions, which we shall consider in the next post.

So geo-political threats to security of energy supply falling short of outright war have been manifest in the past, including once on a truly strategic scale with immense consequences.  If these things have happened before - particularly when the Big One was triggered by volatility in the Middle East, which is hardly ever off the radar - then prudent politicians and planners must contemplate the possibility they could happen again.  And they do.

In part 4 we will consider the steps that can be taken to guard against threats to the security of our energy supply.


All original material is copyright of its author. Fair use permitted. Contact via comment. Nothing here should be taken as personal advice, financial or otherwise. No liability is accepted for third-party content, whether incorporated in or linked to this blog; or for unintentional error and inaccuracy. The blog author may have, or intend to change, a personal position in any stock or other kind of investment mentioned.
Posted by Nick Drew at 9:57 am

Lessons from Germany and Denmark:
Germany has structural problems with energy storage and distribution - how long before the brownouts start?
Part 1 / Part 2 / Part 3 / Part 4